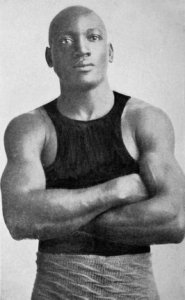 Exactly a century ago, in Reno, Nevada, a fight of terrible beauty sent ripples of hate and revenge across America that resonate to this day.

As the friends of Jack Johnson gather in the old gambling city this weekend to celebrate his win that Fourth of July, a campaign to win him a presidential pardon for the year-and-a-day sentence he received for transporting a minor across state boundaries three years later has run into the same sort of intransigence that so blighted the champion’s career and life.

“It’s wonderful that everyone is rallying around his cause,” said Linda Haywood, Johnson’s great-great niece. “It’s time that the wrong that was committed against my uncle be righted.”

Johnson was convicted under the Mann Act, legislation purportedly designed to protect vulnerable young women, but pointedly directed at Johnson. When a white hooker called Belle Schreiber testified against him, he was convicted, but jumped bail and embarked on a fascinating journey across Europe, before returning to give himself up seven years later. It was a malicious and racist persecution.

President Obama, of all presidents, has been unmoved. Government representatives say there are those living who are in the queue in front of Johnson. A black, dead boxer is not a priority. For Obama, the country’s first black president, righting a wrong inflicted on Johnson, boxing’s first black heavyweight champion, would seem to be no more than symbolic.

Yet it was that very symbolism, the public face that Johnson, the son of former slaves, turned with such taunting glee against white supremacists of his day, that not only resulted in the lynching of at least 20 black people in riots that swept the country in the wake of his win over the very white and bloodied James J Jeffries in 1910, but eventually opened the way for black fighters to be afforded their equal standing, and for African Americans to proclaim their champions with pride.

By any standards, Jack Johnson was a remarkable man. Not only did he redefine the art of boxing with a style that modernists such as Muhammad Ali would recognise, but he countered prejudice in a manner that infuriated bigots from Galveston, Texas, where he was born, to the halls of power in Washington, and on to London and Moscow, where he befriended the tsar and that intriguing Iago of Russian aristocracy, Rasputin.

He whored and partied, seduced white women, drove fancy cars with reckless abandon, ran nightclubs, spoke a mangled version of French and mixed with gangsters, poets and princes. There was not a public figure of the age who could compare with Johnson for audacity and style – or white-baiting blackness. 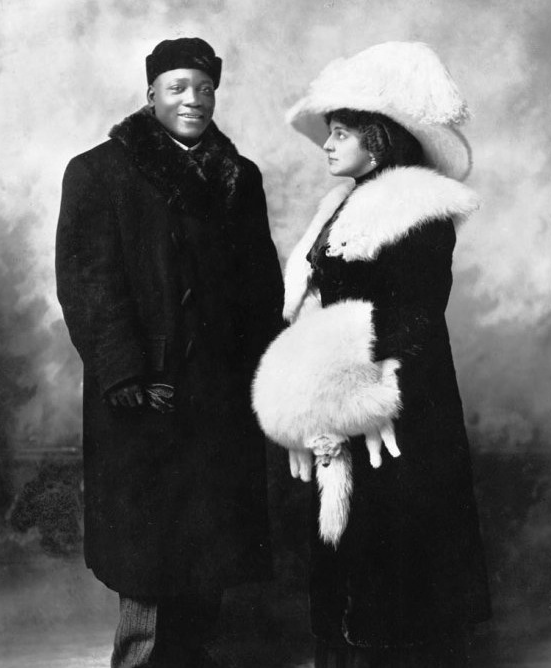 The contest itself made Johnson a near-universal figure of hate. He did not so much beat Jeffries that furnace-hot afternoon as pummel him into a bleached heap in the desert sun. And he enjoyed every minute of it.

Lennox Lewis was a beneficiary of Johnson’s refusal to bow to his masters, and in conversation a little while ago, spoke of Jack’s legacy and what it meant to other black heavyweight champions, including himself.

“To be honest, I knew more about Muhammad Ali,” he said. “He was in our time. But I learned about Jack Johnson. Ali’s contribution was profound, but Jack Johnson’s was the first. It was quite a story. I am a lover of history and it was good to look again at the sort of attitudes that were about back in those days, to see how far we have come.

“Even though black people were, in some ways, more accepted in American culture, the promoters’ dream became to look for controversy. And Jack Johnson was the first great showman. He gave them what they wanted. Look at the time he lived. It was remarkable that he was travelling the world, as a black man, getting arrested, leaving America, going to Europe. In the end he got old, like we all do, and he got knocked out by Jess Willard.”

Lewis was saddened to learn how the Jeffries fight transpired, and why. Jeffries was a former champion dragged out of retirement by worried white America to challenge black Jack, who had ripped the title away from the Canadian Tommy Burns in Sydney two years earlier. On that Boxing Day in 1908, police invaded the ring to stop the slaughter, but they could not prevent Johnson being declared the champion, the first representative of his people to hold the biggest prize in sport. That was when the search began, largely at the instigation of the writer Jack London, for a Great White Hope to erase what he called the “golden smile” from Jack’s face. It was poor Jim’s destiny to be that man.

The promoter Tex Rickard was anxious to give the bout at least a hint of respectability. HG Wells and Arthur Conan Doyle were touted as referee, but declined. Rickard even asked President Taft to do the job. The president, like Obama a century later, was busy. So Rickard did the job himself, as redundant a task as he ever undertook.

The New York Times declared: “If the black man wins, thousands and thousands of his ignorant brothers will misinterpret his victory as justifying claims to much more than mere physical equality with their white neighbours.”

They all wanted Jim to win. But he was 37 and too slow, after five years away from the ring. Jack did as he pleased, ignoring the baying of the mob of 15,766 mostly drunken pimps, outlaws and gamblers, before he put his man out of his misery in the 15th round. Jim took home $192,066, Jack got $145,600. There was good money in racism.

For a taste of the evil of the times, Johnson himself is as reliable a source as many. He says this in his autobiography, taking liberties with the attendance: “More than 25,000 people had gathered to watch the fight and, as I looked about me and scanned that sea of white faces, I felt the auspiciousness of the occasion. There were few men of my own race among the spectators. I realized that my victory in this event meant more than on any previous occasion. It wasn’t just the championship that was at stake: it was my own honor, and in a degree the honor of my own race. The ‘White Hope’ had failed.”

As the acclaimed American film-maker Ken Burns said in his 2006 documentary Unforgivable Blackness: The Rise And Fall Of Jack Johnson: “Johnson in many ways is an embodiment of the African-American struggle to be truly free in this country – economically, socially and politically. He absolutely refused to play by the rules set by the white establishment, or even those of the black community. In that sense, he fought for freedom not just as a black man, but as an individual.”

Johnson’s own people even wrote a spiritual about him:

Amazin’ Grace, how sweet it sounds,
Jack Johnson knock Jim Jeffries down.
Jim Jeffries jump up an’ hit Jack on the chin,
An’ then Jack knock him down agin.
The Yankees hold the play,
The white man pulls the trigger,
But it make no difference what the white man say,
The world champion’s still a nigger!

White America’s response to the fight, viciously prosecuted by the Ku Klux Klan in the days that followed, rolled on for 27 years, until Joe Louis beat another “James J”, the Cinderella Man Braddock, to interrupt the run of non-black heavyweight champions with crushing certainty. 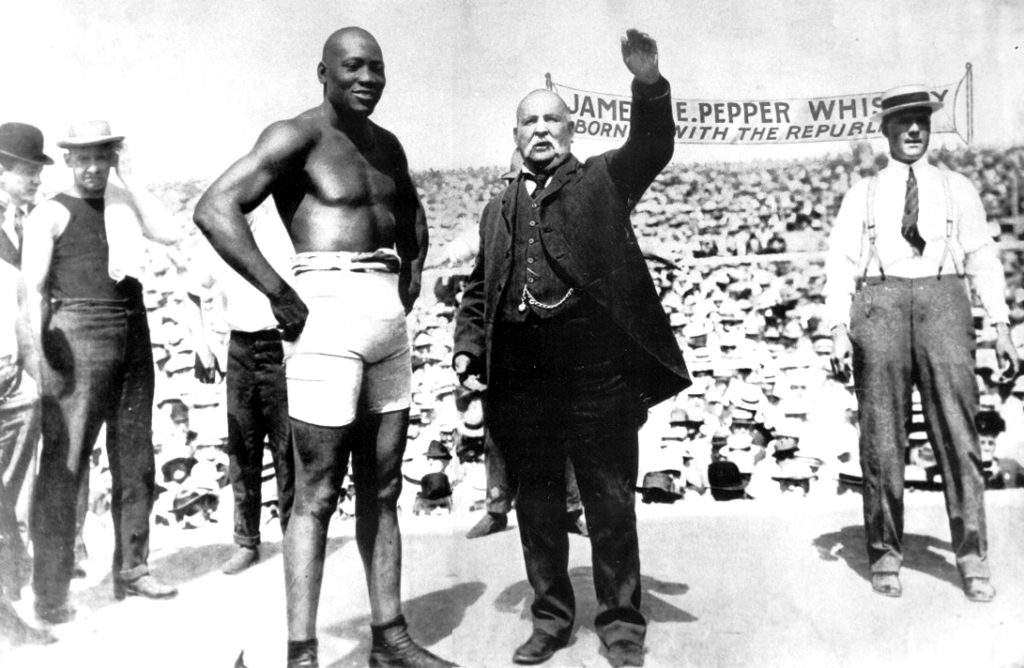 Johnson was there in Chicago to see Joe succeed him. Indeed, to the incredulity of all, Jack was still a licensed boxer. A year after Louis’s win over Braddock, the Galveston Giant, slightly stooped now at 60, got into a ring with one Walter Price in Boston and was knocked out in seven rounds.
Johnson carried on selling himself for several years after losing to Davis, dressing up in loincloth and spear as part of a travelling circus, even sparring with old opponents from decades earlier, black fighters who had also found the bottom of the barrel. It was a wretched decline, no less shocking for its inevitability.

Jeffries, who limped away from Reno and home to his alfalfa farm, more pitied than derided, never to fight again, went bankrupt in the 20s and died in penury in 1953, largely forgotten. 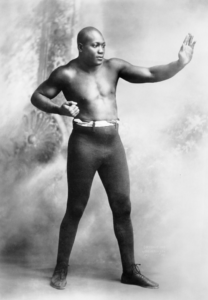 Louis would reign with far more panache than Jeffries ever did and certainly more respect for the establishment than Johnson had.
Johnson fought on into middle age, unrepentant, a proud, often arrogant man once feared for his fighting skills but reviled all his life for his wilful disregard for the racially bent mores of the day.

He knew that to defy the status quo was to pay a price, not just for himself but for his race. His victory over Jeffries so angered racists they conspired to “get him”. They did, in a way – but he got them too, exposing them for what they were.

Jack had latter-day incarnations, albeit more sullen, in Sonny Liston and Mike Tyson, rebels with menace and disregard for rules. But it was in the loud and charismatic shape of Ali that the ghost of Jack Johnson was most clearly stirred.

Johnson, a notoriously reckless driver, died when he crashed his car on the way to seeing his old friend Joe Louis in a world title fight in New York in June 1946.

As the American sports writer John Lardner said at the time: “Jack Johnson died crossing the white line for the last time.” In all likelihood, he would not have had it any other way.