Black as Jack ... the fight that challenged a nation

In America, Black ghetto dwellers and sharecroppers rejoiced. In cities, from New York to Omaha, Blacks smiled with delight. Joy and pride spilled over into arrogance or so some Whites believed. In the last week of 1908, social change seemed close at hand. Most reports implied that Jack Johnson had started another American revolution. While the Johnson victory paved the way for other Black athletes in America, in Australia it only served to promote greater suspicion of the Aborigines. The news had to be suppressed at all costs. Otherwise they too might one day take on the White Man at his own game. 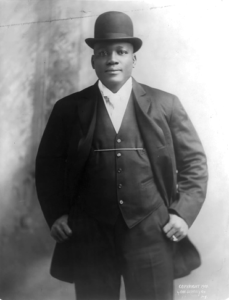 Johnson’s later career he became a black hero in America, married four white women, and beat countless white challengers as he remained top dog in boxing for 7 years. But the whites had their revenge. They found a big hulk called Jess Willard who in 1915 beat Johnson in twenty-six rounds when Johnson was thirty-eight years old. In 1920 the Americans gaoled him for a year, under the prostitution provisions of the Mann Act for transporting his wife-to-be across state line. When he came out of prison, for the blacks, he was a symbol in the struggle for negro emancipation. For the whites he was ... perhaps ... the greatest heavyweight of all time. Nobody cared what happened to Tommy Burns.

Produced by Produced by Blue Trumpet for Radio 2RRR, Sydney, Australia
Researched by Ray Rose
Adapted for radio by James Benn
Voices in order of appearance…

Introductions and credits by Amie Maguire
Special thanks to Sue Liolio for support, talent scouting, costume AND set design.